“A Type of Interventional Radiology”: A Quaint Memory from the New York Times 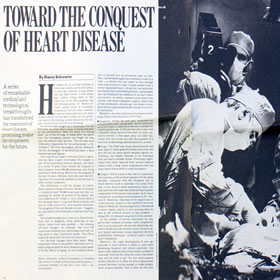 I recently was rifling through some old files of news clippings (you remember those pesky things, don’t you?) and came across a major New York Times Magazine feature from 1983. It was titled, “Toward the Conquest of Heart Disease.”

Finally near the end of the article, the author briefly mentions something he calls “a type of interventional radiology” which has “great potential advantages but remains experimental.”

He only spends a total of 62 words on its description, about 1% of the entire article:

One that has been attempted with considerable success is a kind of interventional radiology. A catheter with a tightly packed balloon built into its tip is guided toward the site of an arterial obstruction. It is then filled with air and pressed against the cholesterol buildup, squeezing it tighter against the arterial wall or breaking it in pieces, to be eventually absorbed.

Today, of course, we call this coronary angioplasty, or Percutaneous Coronary Intervention (PCI). With the addition of stents, catheter-based PCI has replaced much of bypass surgery. And TAVR aortic valves, also delivered by catheter, are beginning to replace open surgical valve repair.

Yes, this article was written over three decades ago, and a half dozen years after the first coronary angioplasty has been performed. But the relative rapidity with which catheter-based therapies have come to prominence is astonishing. Over 600,000 PCIs are performed annually, just in the U.S., not only reducing the recovery time required for open surgery, but expanding the treatment benefits to patients who could not withstand open surgery. Minimally invasive devices and treatments delivered via catheter include carotid stents, coils to the brain to reduce the damage from strokes, stents to the heart which literally stop a heart attack in its tracks, abdominal aortic aneurysm repair, targeted delivery of chemotherapy, opening of blood vessels in the legs, kidneys, and more.

Interestingly, just after Schwartz mentions this new “type of interventional radiology,” he also discusses with equal space the use of laser beams to vaporize the arterial obstruction, which sounded sexy at the time, but ultimately didn’t work.

But angioplasty did work. Not just the balloon “squishing” the plaque in a coronary artery, but it worked to open up a whole new world of medical therapy, performed from the inside out.

As Andreas Gruentzig, the inventor of coronary angioplasty said:

“Whatever becomes of the method, I have left one mark on medicine: I have shown that man can work therapeutically within the coronary arteries themselves in the face of an alert comfortable patient.”

By the way, before Gruentzig performed the first coronary angioplasty, he was a radiologist, a new type of radiologist!

One Response to “A Type of Interventional Radiology”: A Quaint Memory from the New York Times