For the interventionalist, proper sizing of coronary stents is critical. While imaging via angiography has been the standard for years, newer intravascular imaging technologies, such as IVUS and OCT, are becoming more widely used, as evidence accrues that these modalities make a difference in outcomes. For example, IVUS (Intravascular Ultrasound) not only allows the measurement of the exact open diameter of the vessel, as seen on angiography, but it shows the “invisible to angiography” layer of plaque. plaque that will be compressed, so that a more accurate post-PCI diameter can be determined. Under-expanded stents have been associated with increased stent thrombosis and restenosis. END_OF_DOCUMENT_TOKEN_TO_BE_REPLACED

There’s a lesson for the Absorb BVS in the history of interventional cardiology (an area of particular interest in this 40th anniversary of angioplasty year). There’s  no question that the concept of a stent that dissolves and disappears is intriguing, and potentially clinically significant. Stents were invented because after balloon-only dilatation, the artery would sometimes collapse, or the spongy plaque would not compress neatly against the arterial wall, or the plaque would regrow, resulting in a very high rate of restenosis (reblocking of the artery).

Stents prevented all of this. Stents reduced the 3-5% acute closure rate that sent patients to bypass surgery after balloon angioplasty almost to zero. END_OF_DOCUMENT_TOKEN_TO_BE_REPLACED

Status of the “Disappearing Stent” in Europe: It’s Complicated!

A number of news sources, including this one, posted articles and tweets to the effect that the Absorb was being taken off the commercial markets and, as the letter stated, “Effective May 31, 2017, the device will only be available in clinical register setting at select sites/institutions that will play a pivotal role in the monitoring of this technology until Summer 2018 at which time the situation will be reviewed.”

This morning Abbott reacted to this initial flurry of reports that they had “pulled the Absorb” with some clarification: specifically that the Absorb is NOT being pulled from the market and still retains the CE Mark. An Abbott spokesperson told Angioplasty.Org, “Absorb will continue to be commercially available in Europe through the registries.”

But the relationship, as they say on Facebook, is complicated.

END_OF_DOCUMENT_TOKEN_TO_BE_REPLACED

Over the next three days, a voluminous amount of data will be presented, shared, and debated among an estimated 18,000 attendees of the annual meeting of the American College of Cardiology, this year held in Washington, DC.

While the meeting covers the whole spectrum of cardiology and heart-related issues, there are a number of studies and late breaking clinical trials specific to the subspecialty of interventional cardiology. END_OF_DOCUMENT_TOKEN_TO_BE_REPLACED

At this week’s annual European Society of Cardiology Congress in Rome, an important randomized clinical trial on stents was presented by Professor Kaare H. Bønaa, MD, PhD of the Clinic for Heart Disease, St. Olav’s University Hospital in Trondheim, Norway. Called NORSTENT, short for the “Norwegian Coronary Stent Trial,” this was the largest stent trial ever conducted, with 9,013 patients followed for six years. That’s serious! END_OF_DOCUMENT_TOKEN_TO_BE_REPLACED

COURAGE: Does 15-Year Data Have Any Clinical Relevance?

Appearing in the New England Journal of Medicine and titled “Effect of PCI on Long-Term Survival in Patients with Stable Ischemic Heart Disease,” this study, performed by Dr. Steven P. Sedlis and other COURAGE trial investigators, is described as “an extended survival analysis to examine the potential long-term survival benefit from initial PCI among the patients with stable ischemic heart disease who were followed for up to 15 years after initial enrollment in the COURAGE trial.”

This new analysis concluded: “…we did not find a difference in survival between an initial strategy of PCI plus medical therapy and medical therapy alone in patients with stable ischemic heart disease.” This also was the finding of the original COURAGE trial at five years. END_OF_DOCUMENT_TOKEN_TO_BE_REPLACED 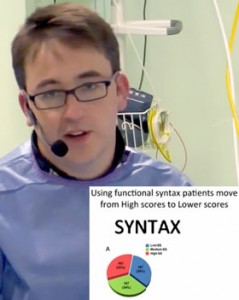 If you’ve been wondering what iFR (Instant wave-Free Ratio) is, how it works, how it compares to FFR (Fractional Flow Reserve) and, most importantly, how it affects clinical outcomes, then click here to register for a free, online, interactive live case being done on Monday, April 13, 2:30pm-3:30pm London Time, 9:30am-10:30am New York Time).

Interactive: that means you can ask questions!