According to reports yesterday by the Mumbai Bureau of Pharmabiz, and confirmed today by MassDevice, Medtronic has launched its Resolute Integrity Drug-Eluting Stent (DES) in India for the treatment of coronary artery disease (CAD). The Resolute Integrity is the only stent approved by the FDA for use in diabetics, based on a large cohort of diabetic patients in the Resolute clinical program.

Diabetics historically have had higher adverse events when treated with PCI (angioplasty and stents) — but the data from the Resolute trials showed virtually no difference between diabetics and non-diabetics, leading the FDA to approve the indication.

Which brings us to India — which has the second highest diabetic population in the world. As pointed out by MassDevice, “…the launch could be an important one for patients in the country as well as for Medtronic CEO Omar Ishrak’s ongoing commitment to expanding the company’s reach in emerging markets.”

We at Angioplasty.Org would agree that India represents an unfortunately rapidly-growing “market” in this area — our Patient Forum has been getting increasing numbers of postings from patients in India and neighboring countries looking for answers.

Although not connected with the launch of this stent, the Medtronic Foundation announced last week a commitment of $6 million to help the underserved population in India with cardiovascular disease and diabetes.

And since we’re on the topic of product launches of stents, we just reported on Abbott’s launch of the Absorb bioresorbable everolimus-eluting…errr…ummm…not stent…what is the name of that device again? Oh yeah, “scaffold.”

You know, when is a stent not a stent? Answer: when it disappears, as in “bioresorbs,” or when it just gets renamed, in this case, as a “scaffold.” 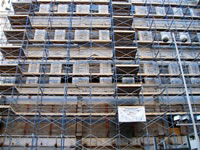 So I just have to say this. Back in 2009, when Abbott announced the two-year results of the first 30 patients to have received this novel device, they still called it a “stent.” At that time I wrote a blog post, titled “Is The Scaffolding Coming Down?” and I used the metaphor of the scaffolding on a construction site, how it went up to serve a purpose and, when that purpose had been fulfilled, how it was removed: just like the Absorb stent. I even used this photo to emphasize my ingenious comparison.

So not long after that, Abbott started calling their product a “scaffold” not a “stent”. I claim bragging rights!!